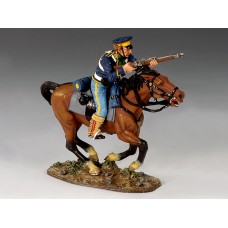 MOUNTED DRAGOON WITH RIFLE BY KING AND COUNTRY (RETIRED)“BOOTS & SADDLES”From the mud and blood ..

Lt. Col. George Armstrong CusterThe commander of the famous 7th Cavalry and already a hero from the ..

Kneeling FiringDue to the stifling mid summer heat this trooper has discarded his heavy wool jacket .. 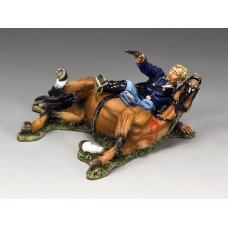 ON HIS KNEES BY KING AND COUNTRY (RETIRED)  Clutching a serious head wound and his carbine by h..

Lying Firing a CarbineRETIRED AND SOLD OUT ON KING & COUNTRY WEBSITE..

Buffalo Calf Road WomanIllustrates one of the many females who took part in the battle. A Northern C..

Crazy HorseNext to “Sitting Bull”, probably the most famous of the Sioux war chiefs was Crazy Horse...

"Rain-In-The-Face"Another of the great Lakota Sioux war chiefs and a close friend of “Sitting Bull”...