The Jack Tars & Leathernecks Collection features both Marines and Naval personnel from many countries of the world. By the eighteenth century, most of the great powers had a significant presence on the high seas.

The crews of the warships were slow to uniform in the modern sense, but the officers and small contingents of sea going soldiers, and later Marines, wore specific uniforms and insignia representing their countries. 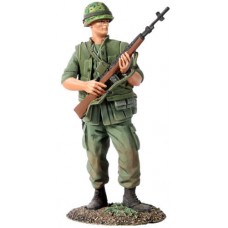