Desert DingoThis is the third and final version of this little British armoured reconnaissance vehic.. 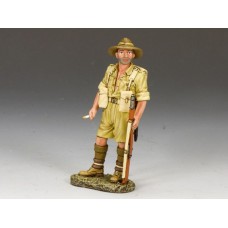 Valentine MK III TankThe Valentine was the most produced of any British-designed tank during WW2. Mo..

Sergeant Tommy-GunnerProviding additional fire support for his officer and men the Tommy-Gun" toting..

Lying Prone Bren GunnerAn invaluable asset to any squad of British and Empire infantry was the handy..

Lying Firing RiflemanNext to the Bren Gunner this rifleman acts as his number two"."..

Charging w/ Rifle and BayonetBullets are good but sometimes it takes the cold steel of a bayonet to ..

Daimler Mk.2 Armoured CarThe Daimler Armoured Car was one of the most successful British armoured ca..