The “Waffen SS” was the fighting arm of the SS (Schutzstaffel) which had originally been formed to be Hitler’s personal bodyguards during the early days of the Nazi Party.

It grew from just three regiments to over 38 divisions during WW2 and served alongside the regular army. Although originally only recruited from Germans of pure “Aryan” origin it eventually included volunteers from all parts of Western Europe and even some from the East and the Balkans including K&C’s Bosnian Muslims of the “Handschar” Division.

WS083  MASSO VON MANTEUFFEL“Hasso von Manteuffel”. This General was one of Germany’s best and m.. 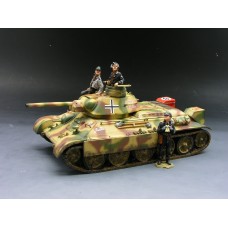 WS098 German T34RETIRED AND SOLD OUT ON KING & COUNTRY WEBSITE..

"Get Ready!"As one Wehrmacht Panzer Grenadier watches the advance of the enemy another prepares to p..

WS122  ADVANCING ON THE ENEMY Perhaps supporting the half track are these three Waffen SS ..

WS141  Street PatrolSmall groups of patrolling Wehrmacht soldiers were a familiar sight in the ..